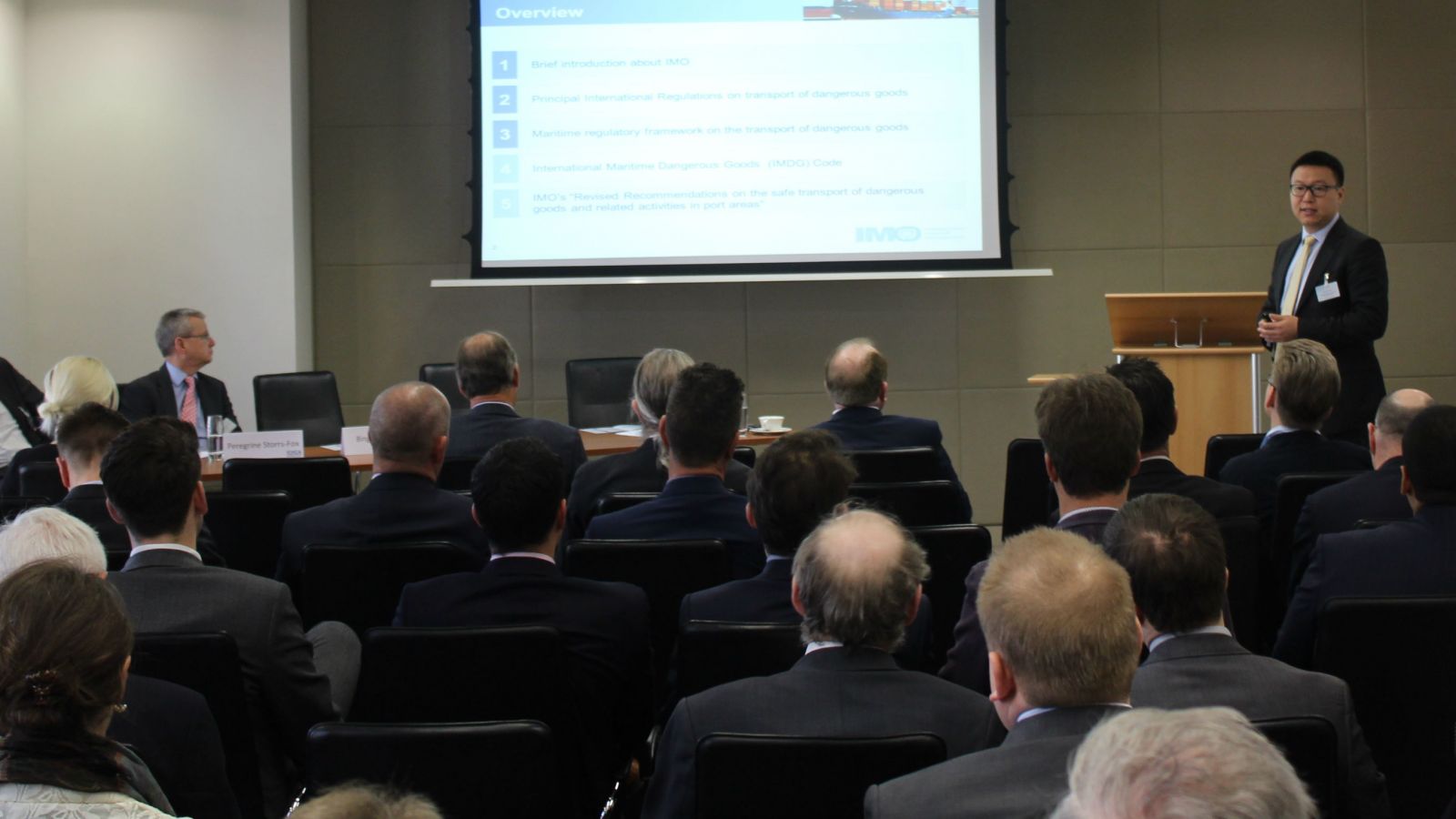 Dangerous goods now making up an estimated 10-12 percent of global container trade - accounting for potentially up to six million or more shipments per annum.

Bingbing Song, Technical Officer - IMDG Code at the IMO emphasized the mandatory nature of the IMDG Codes and distinguishing them from the newer Code of Practice for Safe Packing of Cargo Transport Units (CTU Code), which remains non-mandatory. While the IMDG Code has been adopted by 172 countries, attendees heard that non-compliance feedback to the IMO is astonishingly low, with only five reports submitted last year. Competent authorities are urged to address this poor state of affairs, as non-compliance reports are crucial to identifying and addressing the major safety risks worldwide.

TT Club Risk Management Director, Peregrine Storrs-Fox emphasized that dangerous goods are of fundamental concern to the insurer. Among other initiatives, he called on industry and regulators to explore how new ‘big data’ technology can be leveraged to generate better insights that can drive better safety. He noted that cargo packing and fire are together responsible for nearly 25 percent of all incidents and over 25 percent of total claims costs for the Club.

Ken Rohlmann, Senior Director Cargo Service / Dangerous Goods at Hapag-Lloyd and Vice Chairman of the Cargo Incident Notification System, said that misdeclaration, whether from fraud or miscommunication, is among the key risk factors. “Known dangerous goods transports are well-planned, checked and executed by experts. The real risk we are exposed to is the risk we cannot see: dangerous goods or other sensitive commodities that are not properly declared to shipping lines,” he said.

Rohlmann outlined how Hapag-Lloyd’s new search engine, Cargo Patrol, has been designed to scan the booking environment in real-time to pick up potentially undeclared dangerous goods or other suspicious cargo, using known keywords and synonyms. The system reports approximately 1,250 potential hits per day and will be made available for use by other container lines in future through IBM. “With this tool in place we have reduced the risk to our crews, vessels, customers’ cargo and the environment through early detection,” he said.

Captain John Leach, Risk Manager at Britannia P+I added that in the specific case of calcium hypochlorite, all fires in the last 15 years have been as a result of misdeclaration.

New technologies for the container booking environment will help to improve visibility, control and accountability, said James Douglas, Director at Exis Technologies, who explained how the company is helping to build a shared online database portal for managing dangerous goods shipment data – critical in the current alliance and vessel/slot sharing environment where cargo may be booked with one carrier but moved by another.

“We need more enforcement of the rules”, asserted Alex Kemp, Senior Associate at Holman Fenwick Willan (HFW). From his experience working on “a large number of container ship casualties caused by dangerous cargo, including lithium batteries, charcoal, ‘blowing agent’, and of course, calcium hypochlorite,” Kemp argued that fraud is widespread and that shippers need to be brought to account to prevent misdeclared cargo from finding its way into the supply chain. “Casualties from dangerous goods far outweigh casualties caused by overweight containers in terms of volume, severity and financial cost,” he said.

Keith Bradley, Technical Adviser on IMDG Code issues and former Hazardous Cargoes Adviser at the U.K. Maritime and Coastguard Agency, echoed this sentiment. He said the industry needs a holistic approach to look at all cargoes and suggested that parties could ask to check the training records of other parties in the supply chain before accepting goods.

More pressure on the regulators themselves is needed, said Craig Neame, Partner at HFW. Discussing lessons from the Tianjin Port disaster of August 2015, Neame said that “we have to look at enforcement as much as the legislation itself.” He also called on shippers, carriers and ports to share more information, adding: “We need more events like this to mobilize all participants in the maritime supply chain.”

Conor Feighan, Policy Advisor for the Federation of European Private Port Operators (FEPORT), said that dangerous goods guidance itself could also be improved, noting that in some cases useful information is not communicated to port operators and guidelines are sometimes too general and unworkable, for example in the case of landside planning.

Wouter de Gier, Global Head of Safety, Environment and Performance Management at APM Terminals, explained how the global container port operator has developed its approach to dangerous goods. A major incident at its Mumbai CFS in 2011, leaving two dead and 13 injured, spurred the introduction of global minimum safety requirements, followed in 2014 by the ‘Fatal 5’ program.

The Tianjin tragedy in August 2015 was a “wake-up call” for the whole industry, he said, prompting APM Terminals to conduct a baseline review of dangerous goods risks across the globe, including a joint supply chain assessment with sister companies Maersk Line and Damco. The exercise revealed “big differences” between facilities and also showed that 45 percent of responding terminals were within two kilometers of a dangerous goods storage facility – the nexus of the Tianjin disaster. Subsequent work led APM Terminals to the release of a global dangerous goods operating standard in 2016.

Mr de Gier nonetheless acknowledged that there was still much more to be done to improve everyday practice, including stopping the current perverse financial incentive for terminals and shipping lines to keep boxes in depots for years at a time. Long-standing dangerous goods containers are “our blind spot,” he said.

Cultural change within the freight forwarding community is desperately needed, said Captain Terry Frith, Technical Manager of the non-profit Chemical Distribution Institute (CDI). He pointed out that stakeholders in the chemical tank community understand the risks involved; an appreciation he says that is fundamentally missing within the dry cargo industry.

General lack of awareness was cited also by Jim Robertson, Dangerous Goods Safety Adviser at securing technology provider Cordstrap, as a major cause of incorrectly packed cargo. When dangerous goods are rejected, “we need to be telling the packers what they have done wrong with reference to the CTU Code,” he argued. It is not enough to simply reject cargo, concurred seminar attendees: each of the stakeholders has a role to play in bringing awareness and training to improve the packing of dangerous goods.

In order to get the CTU Code achieving its purpose, legislators desperately need feedback from industry, urged Francesco Dionori, Chief of Transport Networks & Logistics Section Sustainable Transport Division at UNECE. He told delegates that there is a lack of data concerning how the CTU Code is being used. In fact, it was the first time he had seen a number for how many incidents were caused by badly packed cargo, he revealed, referring to TT Club’s figure of 14.2 percent.

A survey designed for this very purpose has recently been launched jointly by ICHCA International, World Shipping Council, Global Shippers Forum and TT Club. One idea proposed at the seminar to improve safe packing was to make the training element of CTU Code mandatory.

“This is our call to arms,” said Captain Richard Brough, Technical Advisor to ICHCA International “We need to harness the Tianjin moment to bring far greater awareness of the very real risks involved in the transport of packaged dangerous goods. We are hindered by complexity throughout the supply chain and from the regulations. The industry has today called for a ‘dummy’s guide’ to the IMDG Code to cut complexity and communicate it in simple terms to the people who need to know it. I believe that ICHCA is best placed within the industry to respond to this challenge so we will be looking at how to produce this much-needed guidance in the coming months.” Source